I think that no other franchise in the history of cinema puts more pressure on movie makers (because naming everyone involved in the production of a movie would be a long list!) than the Star Wars franchise. When the prequels came out there were many mixed reviews and like others, I had issues with too much CG and even more with JarJar Binks. Much to our delight,  Episode 7 came out in 2015 and I’d say that there was generally a positive feeling that the movies are heading in the right direction. But with the theatrical success of Ep. 7 came the challenge of bringing to the big screen an often discussed side story from Episode 4: A New Hope– the acquisition of the Death Star Plans.

Thankfully with director Gareth Edwards at the helm, Rogue One has become quite a success- to date grossing 800M off of a 200M budget and with an overall favorable review roster to boot.

When Rogue One was announced with this:

let’s just say people were going full nerd on.. yup, including me. We learned that the lead was Jyn Erso- yup.. leading character who is NOT a Jedi! (or with any Jedi powers that we know of). As movie-goers this is what we had to work with as we theory-crafted how the story would be told.

That was pretty much ALL we knew- that many Bothans would die. But as luck would have it we already knew that the mission – even with its high cost- was a success.

When I finally saw the movie, I was not disappointed.

Rogue One is a war movie- I know, I know.. before you go tar and feather me, I know that it IS a Star Wars movie- but think of it as one of those war movies that you might have seen like Saving Private Ryan or a series like Band of Brothers– THAT kind of epic war feature that that leaves you with the whole never say die attitude (“I am one with the Force…”).  Enter a typical rag tag band of heroes against impossible odds with nothing but a glimmer of HOPE to push them forward- played admirably by a stunning cast  – it’s an underdog story that we have watched countless times before but what makes it special are the magnificent characters who make each push forward both emotionally taxing and rewarding. You can’t help but care for each of them to some degree- even the minor characters who only have a few minutes of screen time.

The movie is still at its core a Star Wars movie and with it came what I think are key elements to any proper post original trilogy SW movie:

A few people will probably think that this movie is a sequel to The Force Awakens- understandable for casual viewers- and explaining it’s place in the timeline somewhat confuses more. Rest assured that after seeing this you WILL want to watch episode 4 (maybe for the 105th time but who’s counting!) The movie establishes such an epic connection to EP4 that brings new meaning to the movies opening scenes and brings even more depth to the struggle of the rebels against the Empire.

Overall, I loved that the kind of magic that Rogue One delivered remained faithful to the vision that George Lucas had– much so that he has directed the sequel to Rogue One.  In theaters May 25th, 1977  =) 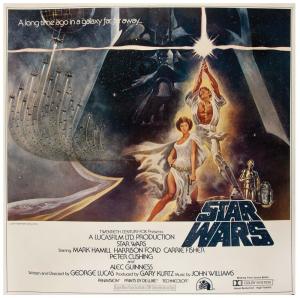 5 of the 6 below are true about mike ○ collects 超合金, リボルテック and Star Wars Lego, ○ photographs people, places and mostly toys. ○ listens to 80's pop ○ is a Final Fantasy おたく / オタク ○ loves vegetables. ○ is father to Lilith and Lucas.
%d bloggers like this: